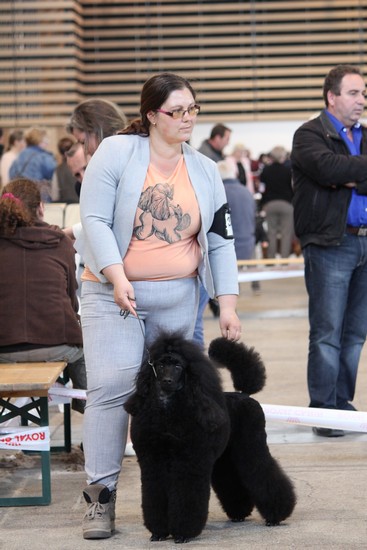 Niki loves intense movement. she loves to run and play. She makes a great pair with Bessy in this regard. Although she can't cath up with her much in warmer periods of year. But she doesn't mind. Outside she loves sand and sandy beaches. And when there's no sand, at least to run in freshly plowed or muddy field. So from this perspective, absulutely ideal poodle for shows, easy to keep clean ;-D. In woods she loves to wallow in leaves. It surprises me over and over again watching her rolling on the ground and taking almost nothing out of it home in her coat. It just mostly fall it all down. What I consider as great is that she does not hunt. If so, then she hunts her friend Bessy or our Lilu, when they ran away and left her behind for a moment. But she does not chase wild animals.

Her need for move brought us to agility trainings. Those make rather calm poodle super hyped creature who on "Niki, go" flies through a parkour. At first I ran with her, but soon it turns out she's quite fast for me. And when I was pregnant I could keep up with her so she started to train with Jan. And they run together since then. I try to make some videos how they do, I share some below. It's not a flawless but they're both getting better and better.

Except playing outside and once a week agility tranings we attend dog shows with her. Her height makes it more challenging, however she's still liked a lot and she completed a couple of champion titles. Care of her black coat is rather different from out apricot girls, but we managed. Though the time, when her puppy coat was changing and knots were appearing out of a blue all the time, was quite tough for both of us.

What more to write about our plushie and ingratiating girl? Plushie is easy to explain, how she came by to such name; she loves plush stuffed toys and loves to carry them. She comes with a toy when she comes for a cuddle, when she wants a treat (we say she actually trades the toy for a treat) or when she feels you're angry at her. Then she comes with a plush toy in mouth and silently whines to show she regrets (which is ethologically a nonsense of course, but one can hardly resist to describe it like this :-) ).
Now it's time to explain what czech word "Vlezlo" means - first it's a word we don't know how to translate. It seems to be a hurt nut to crack for native speakers too, so one word english version suggestions are welcome ;-). In czech it means someone who gets somewhere, creeps, sneaks somewhere. And that's what Niki often does - no matter if you do something or not, often she comes (with a toy in mouth of course) asking for cuddle. Trying to find multiple ways how to get close to you, a bit like a cat... She loves to be held in arms and Jan usually can't resist long such her wishes (because of my pregnancy I couldn't hold her anymore and it remains like that since then). While we sit on a couch or on a floor she comes and sits close or on our legs, having a blissful cuddle.

She simply our darling we love so much :-).