Lord is father of puppies: 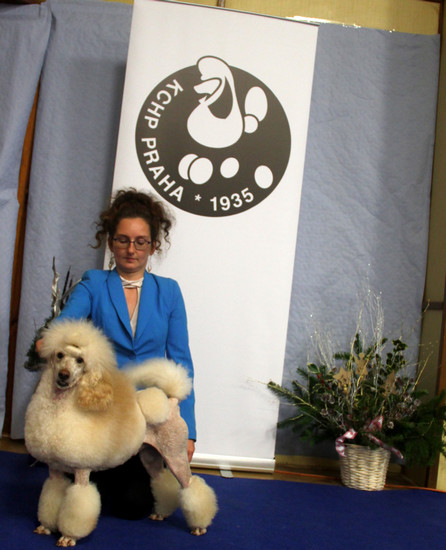 Some of us have a fatefull dog, we have the Parrot. Does it sound odd? But it is not, really. Soon after he was born he appeared to be the ideal, a dream, of what we wanted a stud dog to be. Handsome with interesting look, health tests all ok and representig mother's and father's remarkable bloodline. Such dog simply must stay home. And as we don't want to have both males and females at home, he lives with our friend Petra Kastlova.

How has he came by to such nickname? It's quite simple, who has ever heard him, he knows. Well, he can bark, however at many occasions he rather sreeches. Quite intensively. When he's looking forward to something too much, chases someone he can't catch, when he's not content, you name it. His voice makes him truly unforgettable.

He's very energetic, this is typical for him. Whatever he does, he does at full throttle. Last year he managed to achieve coursing license. He's fully fixed on the prey and concetrated he barely percieves anything else. Even so much he sometimes forgets to bark. But that's rather exception. He's not among the fastest dogs, however he's getting better and better. Let's see in upcoming seasons what progress and achievements is he going to make.

He's also self-confident and perhaps a bit vain. He enjoy shows and to show himself. He likes being admired and carries himslef like a cock in a showring. He's held back a bit by his not fully developed clip, nevertheless we are improving. I like his body constitution and because of that I have opted for not so frequent clip among medium poodles - the continental clip. And he looks goood in it. In my opinion, at least. Obvisouly I can't be objective as I raised him from a little puppy. :-)

Our "Parrot" loves to be outside one walks. He likes to run even alone, just for fun, but of course he enjoy much more with the rest of the poodle pack. That's even better bigger fun. Anytime he's not fast enough, he compensates by his voice. In such a case he tried to catch someone faster, he complains about his legs length and can't keep up. This is often with Archi, a spanish galgo, he takes and plays with as a friend; at least till the moment the greyhaound start to run away, leaving Lord behind.

I should say something about his personality as well. He likes to sleep in a bed under a blanket. He's often not visible there so his presence looks rather like just thrown away pile of clothes. It often happens in such cases he's overlooked by his other dog friends and if so, Lord starts to complain loudly. And as it seems he enjoys to listen to himself, it takes some effort to quiet him. He loves small dogs and puppies. Somehow he feels the need to take care of them, lick them a lot (and thus wet them all over) and poke them by his nose. Because of such attitude we also called him a backup mommny.

Other of his nicknames are: Parrot, Lori or just Lord.